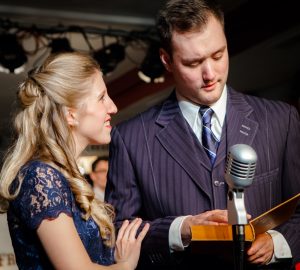 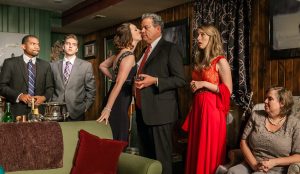 Plot Summary
When novelist Alexandra Ellis throws a party at her Catskills retreat, no one expects a blizzard to strand everybody nor do they suspect there’s a killer amongst them until one guest is poisoned at the party! Desperately, the others try to figure out not only who did it but more mystifying how it was done. They’re baffled by a seemingly impossible crime till one guest thinks of a ruse to reveal the killer, but is stabbed before the unmasking. Everyone even the hostess is a suspect, and a number of murky motives emerge during the night’s strange events. And just when another guest thinks he knows the culprit, there’s another murder the suspected killer couldn’t possibly be responsible for! There are plenty of laughs but the main thrust is for the audience’s nerve-endings with more shrieks of terror than of hilarity especially in the surprise-filled final act with its series of convulsive plot-twists. No one will ever be able to guess the shocker of a surprise-ending! 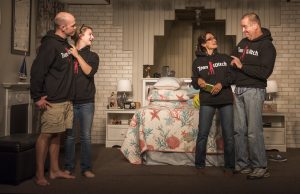 Plot Summary
This award winning romantic comedy is brimming with hilarious as well as moving moments captured from a 38 year marriage. As Jimmy and Alice Diamond clear out the attic of their Malibu home because a turn of finances is forcing them to move into a cramped condo, they find themselves reliving the flawed masterpiece that is their marriage. A subtitle, with a smile, might be, “Till Debt do us Part.” Two pairs of actors play the Diamonds, (early and now, in their marriage) one young and one mature. Throughout, they observe and comment on each other. In one delightful scene, the four confront each other to negotiate the transition into middle age. The fifth cast member plays six different women who influence the Diamond marriage, offering a tour de force for an actress. “A Love Affair” is both a timeless and a timely play, because its story is about financial reverses and how they can either weaken or reinforce relationships, depending on how the difficult times are handled. It’s a moving, identifiable story that rings true, while offering a multiplicity of laughs. 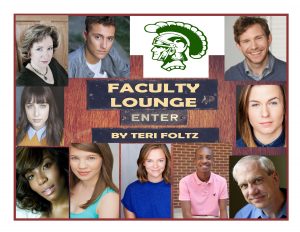 Plot Summary
“Why did you become a high school teacher?” This question, posed by a journalism class to the faculty of a typical American high school, sets the scene for The Faculty Lounge, a hilarious and touching play by Kentucky playwright Teri Foltz. Foltz, herself a former secondary school teacher, takes audiences into the private inner sanctum of a high school faculty lounge where teachers relax, vent their frustrations and share their hopes, both for themselves and for their students. 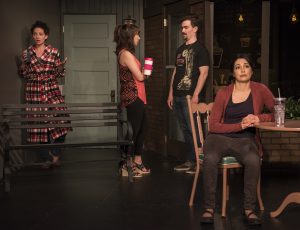 Plot Summary
When entrusting the subject of motherhood to such a dazzling collection of celebrated American writers, what results is a joyous, moving, hilarious, and altogether thrilling theatrical event. Utterly unpredictable, MOTHERHOOD OUT LOUD shatters traditional notions about parenthood, unveils its inherent comedy and celebrates the deeply personal truths that span and unite generations.

The People’s Republic of Edward Snowden 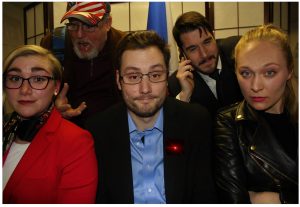 Plot Summary
The Peoples Republic of Edward Snowden is a thought-provoking satire that tackles important questions of freedom and privacy. As the play opens, a press conference is scheduled in Terminal F of Moscows Sheremetyevo International Airport. Audiences are introduced to Edward Snowden (Nick Bryant) by his alluring Russian minder, Natasha (Lara Dohner). She tells us that Snowden, the infamous former CIA employee who revealed details about classified U.S. government surveillance programs in 2013, is making himself available for questions. So begins an evening of immersive theater that takes audiences on a thought-provoking journey into the chilling world of global data-gathering and surveillance. 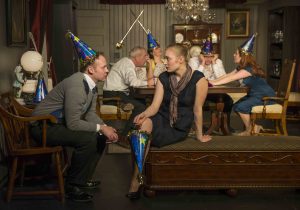 Plot Summary
The Dining Room is a warm and poignant comedy of manners set in the dining room of a typical upscale household somewhere in the Northeastern United States. One of Gurneys most eloquent plays, it skillfully weaves together the stories of multiple generations in eighteen overlapping scenes, each offering a snapshot of a moment in time. The play considers the erosion of American upper-class traditions and values through the lens of dining rituals that play out in a homes traditional gathering place for breakfast, dinner and special occasions.