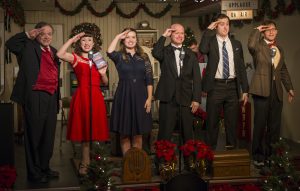 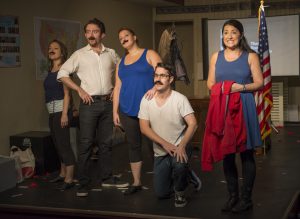 Plot Summary
Oil Lamp Theaters 44 Plays For 44 Presidents is an upbeat, rapid-fire celebration of the American presidency that’s guaranteed to brighten your mood and lift your spirits. Told in a snappy vaudevillian style, this revue remembers each of our 44 presidents with his own short play a brief vignette that may consist of a sketch, a dance, a musical number ranging from a Bach cantata to Gospel, a borscht-belt roast even bread-eating! 44 Plays condenses over 225 years of star-spangled historical malarkey into high-energy entertainment.

Created and originally produced by Chicagos experimental theater company The Neofuturists, 44 Plays For 44 Presidents celebrates the comic, tragic and sometimes surreal lives and legacies of our presidents. This provocative chronicle explores the human and humanly fallible side of each of our 44 presidents while underscoring the important role that WE, the American people, have also played in shaping this history. After all, for better or worse, we elected each of leaders, and have thus, in many ways, written our own story. 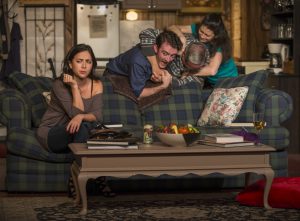 Plot Summary
Peggy Jackson, a 50-ish matron, has dragged her reluctant husband, Frank, an office-supplies dealer, off for a long weekend in a remote cabin with no phone, no wi-fi, no newspapers, no television and no kids. Peggy has romance on her mind, while stick-in-the-mud Frank is dully wondering what they’re going to do all weekend. Peggy finally gets Frank in the mood, only to be interrupted by the arrival of Jill and Tony, a pair of twenty-somethings. Through a mistake, they’ve also rented the same cottage to celebrate their fourth anniversary of cohabitating. To his wife’s chagrin, Frank insists that the younger couple stay for dinner. Ultimately, the two couples agree to share the one-bedroom, one-bathroom cabin for the weekend.

They start out having a good time together, but the close quarters and the differences between the two couples lead to inevitable frictions. Frank and Peggy: long married, middle class, hard-working, taking each other for granted. She’s sarcastic and frustrated; he’s oblivious, irascible and complacent. Tony and Jill: mawkishly in love, well-to-do and living a free and easy life. She’s earnest and idealistic; he’s smug and spoiled. What ensues is a delightful exploration of the stages of life and love. 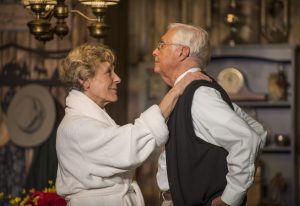 Plot Summary
Summer has returned again to Golden Pond, and so has Norman Thayer, a retired professor, and his wife, Ethel, who are back for a 48th year at their idyllic summer cottage. In their golden years, the elderly couple provide a perfect contrast to each other: Though battling heart palpitations and a failing memory, Norman remains spirited and cantankerous while Ethel, 10 years his junior, delights in all the small things that have enriched and continue to color their long life together. As Norman approaches his 80th birthday, they are visited by their estranged daughter, Chelsea, and her fiancé, who go off to Europe and leave his teenage son behind for the summer. The boy quickly becomes the “grandchild” the elderly couple have longed for, and as Norman revels in taking his ward fishing and thrusting good books at him, he also learns some lessons about modern teenage awareness in return. While their bond strengthens, intimations of mortality are in the air with a growing sense of urgency for Norman to make peace with his daughter. When she returns, Chelsea is married and her stepson has the relationship with her father that she always wanted. Will father and daughter be able to communicate at last?

Father of the Bride 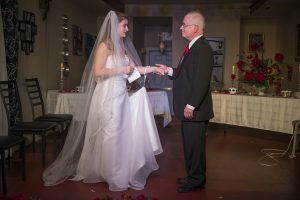 Plot Summary
Mr. Banks learns that one of the young men he has seen occasionally about the house is about to become his son-in-law. Daughter Kay announces the engagement out of nowhere. Mrs. Banks and her son are happy, but Mr. Banks is in a dither. Buckley and Kay don’t want a “big” wedding—just a simple affair with a few friends! Then trouble really begins. The guest list grows larger each day, a caterer is called in, florists, furniture movers and dressmakers take over, and the Banks household is soon caught in turmoil—not to mention growing debt. 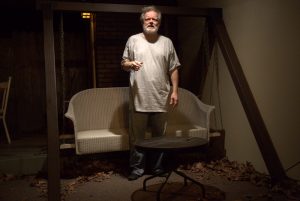 Plot Summary
On the eve of her twenty-fifth birthday, Catherine, a troubled young woman, has spent years caring for her brilliant but unstable father, a famous mathematician. Now, following his death, she must deal with her own volatile emotions; the arrival of her estranged sister, Claire; and the attentions of Hal, a former student of her father’s who hopes to find valuable work in the 103 notebooks that her father left behind. Over the long weekend that follows, a burgeoning romance and the discovery of a mysterious notebook draw Catherine into the most difficult problem of all: How much of her father’s madness—or genius—will she inherit? Winner of the 2001 Pulitzer Prize and Tony Award for Best Play.

Barefoot in the Park 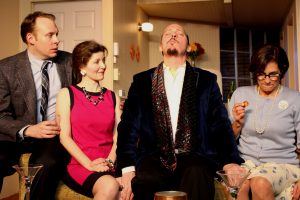 Plot Summary
Corie and Paul are newlyweds, fresh from their honeymoon. Corie is still enthralled by her recent sexual awakening and the adventure that comes with youth and marriage. She wants their passionate romantic life to continue at full speed. Paul, however, feels it is time to focus on his burgeoning career as an up-and-coming lawyer. When they don’t see eye-to-eye about their apartment, their neighbors, and their sex drive, the new marriage experiences its first patch of rough weather.