Plot Summary
Based on a story that appeared in Good Housekeeping and later adapted into a beloved movie directed by Frank Capra, It’s a Wonderful Life finds the idealistic George Bailey on the brink of suicide one Christmas Eve. Luckily, he meets an angel who shows him the value of his life and saves him, thus earning his wings. For this radio play version, the theater is transformed into the 1940s radio studio of New York station WBFR. The small town of Bedford Falls is brought to life by five actors, clever and surprising sound effects and a lot of imagination. It’s a good old-fashioned way to celebrate the holidays with a timeless tale still rings true today and will touch your heart as powerfully as ever. 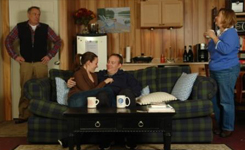 Plot Summary
A couple in their mid-fifties and a couple in their late twenties have accidentally rented the same cottage for a three-day holiday weekend. They decide to share it. We watch the comedic clash between generations. 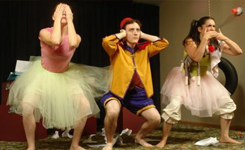 Plot Summary
Oil Lamp Theater is excited to be moving from their traditional space in the Lakeview neighborhood of Chicago to beautiful downtown Glenview. As an introduction to our new community, Oil Lamp is presenting an evening of one act plays which explore the trials and tribulations of theater and love.

Plot Summary
One winter night a woman bakes a pie as a girl tries to finish her college essay. As the deadline looms, unexamined issues of the girl’s adoption from Russia, the rupture of her parents divorce, and the fear of leaving home break through the surface as the mother cajoles, deflects, and maneuvers around her own feelings of sadness and loss. Unfolding in real time, Memory House is about a young and an older woman who are forced to grapple with the past as they face an uncertain future. A funny and moving story about the complexity of living in the world today.