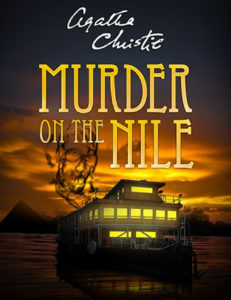 Kay Ridgeway has led a charmed life. Blessed with beauty, enormous wealth, and a new husband, she embarks on a honeymoon voyage down the Nile. Fatal circumstances await when the idyllic surroundings are shattered by a shocking and brutal murder. Under scrutiny is a multitude of memorable passengers, all with a reason to kill. The tension and claustrophobia builds, as a shocking and audacious conspiracy is laid bare.

Caution: There are two gunshots during the performance.

It’s 1947, and the riverboat Lotus is cruising lazily down the Nile River in Egypt. On board is an eclectic mix of tourists — some elegant, some haughty, some troubled and eccentric — all bound for exotic destinations along the ancient and storied Egyptian river. We soon discover that these passengers have odd relationships to one another and, in many instances, these relationships raise troubling questions and some genuine concerns. Since this is a tale created by Agatha Christie, we can be reasonably confident that not everyone on this boat will be around for the end of the cruise.

Among the tourists is a young couple celebrating their honeymoon, the wealthy and charismatic socialite Kay Mostyn (Kalika Rose) and her handsome but financially insecure husband Simon (Jeremy Schaye). Their romantic interlude is soon disturbed by the presence on board the ship of an unwelcomed guest – Simon’s former fiancée and Kay’s one-time best friend, Jacqueline de Severac (Sarah-Lucy Hill). It seems that this uninvited guest is an emotional and mercurial young woman who has been dogging the footsteps of the newlyweds since shortly after their wedding. Though Jacqueline insists that these encounters are completely coincidental, Kay and Simon have serious doubts.

Kay receives yet another surprise when she runs into her uncle and guardian, Canon Ambrose Pennefather (Peter Brian Kelly), a clergyman also traveling on board the steamer. When Kay remarks about the remarkable coincidence of this encounter, Pennefather responds, “Indeed, Kay, you know I always believe there is no such thing as chance.” As Canon Pennefather takes on a pivotal role as the detective who attempts to unravel the mysteries unfolding on the steamer, these words soon become prophetic.

Tensions build and complications increase as the motives and hidden agendas of each character on the ship are laid bare. For example, Dr. Ludwig Bessner (Bill Chamberlain) is a seemingly harmless physician from a small country in central Europe. He’s a seasoned traveler who has visited the tourist sites of Egypt many times before. But he, too, turns out to have a connection with Kay Mostyn. Years ago, he says, Kay’s father was directly responsible for the financial ruin of both his family and his country.
Then there’s Kay’s French maid, Louise (Mackenzie Williams). Is she as devious and manipulative as she sometimes seems to be? And what about that unpleasant older Englishwoman with the astonishing name of Miss Ffoliot-Ffoulkes (Gina Phillips)? Her sense of entitlement and class privilege manage to offend virtually everyone who comes in contact with her. And yet, she is accompanied on this voyage by her pleasant and infinitely patient niece, Christina Grant (Katarina Vandlik). Miss Grant seems exceedingly even tempered and sensible, almost to a fault. She is so good-natured that one is tempted to ask… what could she be hiding?

William Smith (Scott Myers), is a brash and irreverent young man who appears to be travelling alone on the steamboat. In his conversations with other travelers he allies himself with causes of the “working man,” and seems remarkably out of place in this upper-class setting. And yet his sharp and cynical wit, together with the sparkle in his eyes, hint at hidden agendas.

As the story evolves and we learn more about this charming but devious little group of travelers, it becomes clear that everyone on board the Lotus is quite capable of murder — even the ship’s Steward (Manny Sevilla) or perhaps the Ship’s Manager McNaught (Ken Rubenstein), both of whom seem to be working hard to maintain order and calm aboard their unlucky riverboat.

In her inimitable fashion, Agatha Christie leads her audience down a hall of mirrors that challenges everyone to figure out “whodunit” before the truth is finally revealed. She takes us on a thrill ride with many twists and surprises that no one sees coming. The tension builds as tantalizing clues are presented that reveal the passions and hidden motives of this group of individuals seemingly thrown together by chance on their Nile River cruise.

When the shocking truth is finally laid bare, it is uncovered with a deft skill and audacity that only a brilliant mind like Christie’s could create.