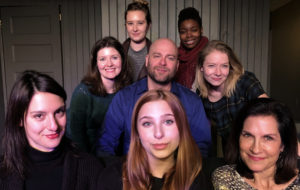 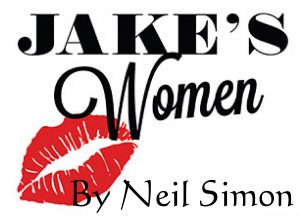 America’s premier comic playwright makes another hilarious foray into the world of modern relationships. Jake, a novelist who is more successful with fiction that with life, faces a marital crisis by daydreaming about the women in his life. The wildly comic and sometimes moving flashbacks played in his mind are interrupted by visitations from actual females. Jake’s women include a revered first wife who was killed years earlier in an accident, his daughter who is recalled as a child but is now a young woman, his boisterous and bossy sister, an opinionated analyst, his current wife who is leaving Jake for another man, and a prospective third wife. Jake, played by Alan Alda on Broadway, and his women definitely deliver.

The performance runs two hours and twenty minutes including a ten minute intermission.

Jake (Dennis Schnell), is a middle-aged novelist who is more successful with his writing than with his personal life. He is passionate about his work, but his fear of “real world” personal intimacy threatens to destroy his relationships with women. Despite his emotional issues, Jake tries hard to connect with the women in his life using the gifts that make him successful as a writer – his creativity and his imagination. In Jake’s Women, the brilliant mind of Neil Simon lets us peek in on some of Jake’s efforts as he navigates the treacherous crossroads between creativity and reality, and between artistic expression and true intimacy. It soon becomes clear that Jake’s quest will be both poignant and hilarious.

When we first meet Jake, he seems to be approaching a crisis point. We learn that he is haunted by the loss of his first wife, Julie (Devri Chism) who died in a car accident ten years ago. Now, Jake’s second marriage to Maggie (April Taylor) seems to be in trouble. He deals with this looming marital crisis in the best – perhaps the only – way he can. Jake first calls on his sister, Karen (Whitney Minarik) to ask her for advice, but she only aggravates the situation be forcing him to acknowledge certain uncomfortable truths about himself. When his wife Maggie arrives home, Jake decides to confront her about his unhappiness with the current state of their marriage only to discover that she is perhaps even more dissatisfied than he is, and that things are even closer to the breaking point than he had imagined.

Jake goes on to seek guidance from his witty and wisecracking therapist, Edith (Beth Goldberg) – even though he rarely listens to her advice. He also calls on his imagined visions of his daughter Molly, who appears to him first as a 12-year old childlike vision (Emrose Seidenberg) who adores him, and later as a young adult of 21 (Abby Walburn) whose savvy insights about grown-up issues are less comforting than those of her naïve younger self.

Inevitably, Jake’s tendency to lose his grip on the physical world leads him, and those around him, into a whirlwind of hilarious confusion. As he increasingly overlaps his real conversations with the fantasies he creates, chaos seems inevitable. When Jake is visited by his new friend and romantic interest, Sheila (Catrina Evans), the many strands of his complex visions play out against the “real world” with a raucous hilarity that only the brilliant mind of Neil Simon could create.

In Jake’s Women, Simon manages to find – as he so often does — just the right balance of touching insight together with the humor and warmth that made him one of America’s most successful comedic playwrights. As Josh Johnson, director of this Oil Lamp production, puts it, “Jake’s Women is very different from what some audiences might typically think of as a ‘Neil Simon play.’ This is definitely a shift from his broader comedies like Barefoot in the Park or Last of the Red Hot Lovers. Here, we see a character who experiences some real moments of pain and discovery as he wrestles with his feelings about a lifetime of betrayal, abandonment and psychological issues that seem to be overwhelming him and threaten to cripple his marriage — and even his ability to interact with the world. But of course, this is Neil Simon, so we watch all this unfold with a wink and a smile, confident as we root for Jake that everything will turn out well — that our hero will, in the end, be able to pull things together.“

Jake’s Women premiered at the Old Globe Theater in San Diego, California in March 1990 starring Peter Coyote as Jake. After a significant re-write, the play opened on Broadway on March 24, 1992 starring Alan Alda as Jake and featuring Helen Shaver as Maggie, Brenda Vaccaro as Karen, and Joyce Van Patten as Edith. Prior to its Broadway opening, Jake’s Women was staged at the Stevens Center in Winston-Salem as part of the North Carolina School of the Arts Broadway Preview Series. In 1996, the play was made into a TV movie starring Alan Alda and Joyce Van Patten who were brought in from the original cast to reprise respectively the roles of Jake and Edith.

“One of Simon’s best.” – The Los Angeles Times

“Spending time with Jake’s Women is a wholly justifiable diversion for the audience as well as the protagonist.” – The New York Daily News

“Simon’s writing in this script is not only stylistically elegant, but a complex examination of the craft of writing itself.” – Chicago Reader